James “Red” Moore, born in 1916, played five seasons in the Negro Major Leagues, during its golden era, and was widely recognized as one of the league’s premier first basemen.

In Newark, Moore played in the “Million Dollar Infield” that included Dick Seay at second, Willie Wells at shortstop and Ray Dandridge at third base.

According to Buck O’Neal, former Negro League player, Mr. Moore could “pick it.” He was a defensive whiz who often entertained crowds before games by catching the ball behind his back while warming up on the field.

Moore grew up in the Bush Mountain community of Oakland City. He graduated from Booker T. Washington High School in 1939, after delaying his graduation from 1929 to 1933 to play semi-pro baseball. 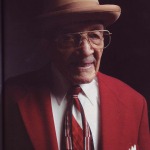 See the feature profile in the March 2007 issue of Atlanta Magazine by Bill Banks. 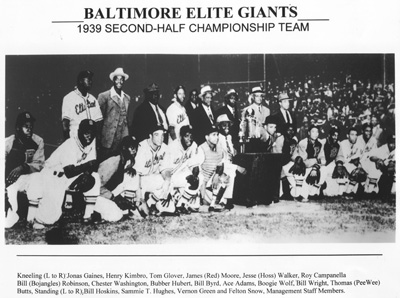 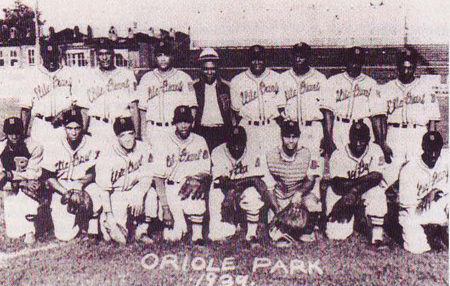 Satchel Paige, Josh Gibson, Cool Papa Bell , Buck Leonard, Double Duty Radcliffe, Buck O’Neal, Hilton Smith and Judy Johnson were among the players that Red Moore played against. Monte Irvin and Moore were teammates in 1937 with the Newark Eagles. He was roomates with Roy Campanella in 1939-41 with the Baltimore Elite Giants. (In the above photo of the Baltimore Elite Giants, Moore is kneeling 3rd from left — that’s Roy Campanella in catcher’s gear in front row.)

Commending Mr. James “Red” Moore and inviting him to appear before the House of Representatives; and for other purposes.

WHEREAS, more than 60 years ago, Mr. James “Red” Moore of Atlanta was one of the shining stars of the Negro baseball leagues, gaining renown as one of the leagues’ most gifted first basemen; and

WHEREAS, prior to the integration of major league baseball in 1948, the Negro National League and the Negro American League showcased many of the most talented baseball players in the world; and

WHEREAS, Mr. Moore first began playing with “semipro” baseball squads at age 13 before being discovered by the then minor league Atlanta Black Crackers in 1934; and

WHEREAS, in 1936, he joined the Negro National League’s Newark Eagles, becoming part of the team’s “million dollar infield,” and in 1938 he played with the Atlanta Black Crackers as a major league team; and

WHEREAS, while Mr. Moore was with the Crackers, the team won the Negro American League’s second-half championship, and he was named to its all-star team; and

WHEREAS, Mr. Moore played with the Baltimore Elite Giants before leaving major league baseball to serve his country as a member of the United States military during World War II; and

WHEREAS, during his athletic career, Mr. Moore gained a reputation for his defensive grace and has been called the “most perfect” first baseman of all time; and

WHEREAS, the DeKalb History Center has recently launched an exhibition of the memorabilia of Mr. Moore, believed to be the only living Negro leagues player in Georgia; and

WHEREAS, Mr. Moore continues to share his story with today’s youth, serving as an outstanding role model for all of Georgia’s athletes.

NOW, THEREFORE, BE IT RESOLVED BY THE HOUSE OF REPRESENTATIVES that the members of this body join in commending Mr. James “Red” Moore on his extraordinary contributions to the history of baseball.

BE IT FURTHER RESOLVED that Mr. James “Red” Moore is invited to appear before the House of Representatives for purposes of being recognized by the House and receiving an appropriate copy of this resolution at a date and time to be fixed by the Speaker of the House.

By Representatives Benfield of the 85th, Watson of the 91st, Oliver of the 83rd, Stephenson of the 92nd, Williams of the 89th, and others. 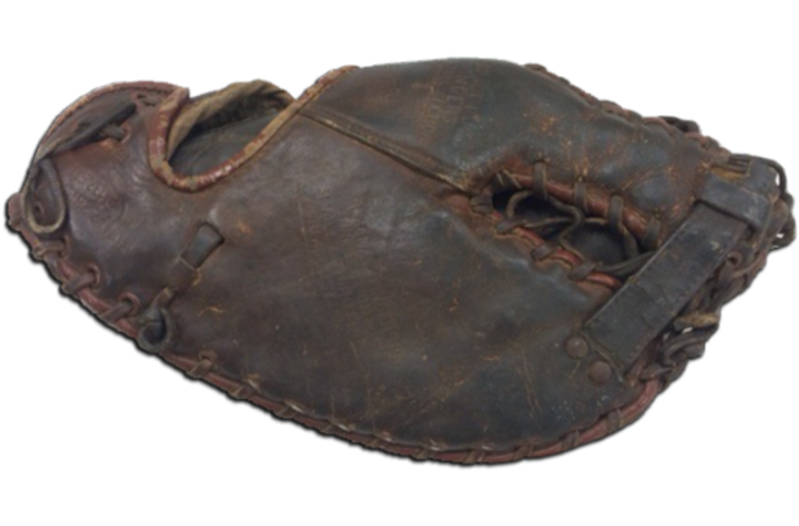 Red Moore’s glove on display at the Atlanta History Center